Our Plans with Ngahue IV 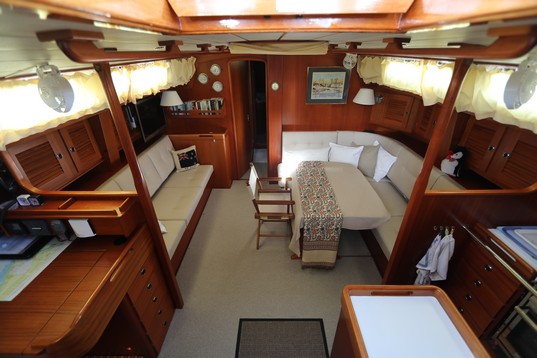 For as long as I have had Hallberg-Rassy sailing boats called Ngahue (one to four), I have dreamed of sailing to New Zealand. As a result, each Ngahue - from HR29 to HR37 to HR43 to HR53 - was, within the physical limits of each boat, prepared for long-distance ocean sailing. Way back in the late 1950s, my mother bought the second edition of John Wray's book "South-Sea Vagabonds" for my father (she was trying to interest him in nautical matters again, having served in the Dutch navy just after the Second World War). Since my very early teens, I must have read this book several hundred times. The name given by Johnny Wray to his boat, the Ngataki (abode of the gods) was an inspiration to search a Maori name starting with "Ng" for my own boat - that search came up with "Ngahue" (see the Presenting Ngahue IV page for more details on this name). Clearly, it was also this book that set me off on a nautical path that I've been following steadily since 1989.


Starting in earnest in 2013 with the purchase of Ngahue III, an HR43, firm dates were set to go blue-water sailing by the end of 2017. Ngahue III had participated in a World ARC and was perfectly equipped to go around again - all we had to do was just modernise her equipment. Nevertheless, in 2015 we seriously thought about the need of going up a size or two for a number of reasons.


The first was that there were going to be two of us participating in this (mad?) plan - Laura and myself, and that I wanted a very stable and larger platform that was able to hold the kind of gear that two people take with them on a circumnavigation-in-comfort these days. And we wanted a boat that was as 'seakindly' as possible in her movements, as one of us has a more tender stomach than the other... Whilst the HR43 certainly was a stable platform, by the time we put our bikes, sail wardrobe and other things on board, we'd used up a lot of the space available - she also had a tendency to move around a little more than I wished for (for the comfort of Laura) in rougher seas.


Yet another reason to go up a size was that we became truly committed to long-term cruising and to living aboard full-time. Jeremy Mason of Transworld Yachts, the U.K. Hallberg-Rassy dealer, had in fact pointed this out to me at some point when preparing my HR37 for ocean sailing: live-aboards really do need a lot more space. It was a wise piece of advice, even if lost on me at the time. Fortunately, it came back to me when looking around for a bigger boat... We now needed to see our boat as our new house and home (Jeremy's advice), and we felt that extra space was needed on board to have those things with you that keep you busy and happy when you are a long way away from home and land.


Moving up one size in Hallberg-Rassy's range took us to the HR48 (or its predecessor the HR46). The HR 48 is a relatively modern design and therefore commands a premium price, even second hand. As a result, we saw from our calculations that we would be paying a lot of money for only 5 extra feet in boat length. We thought about this quite a lot and decided that the Hallberg-Rassy 53 therefore seemed an altogether better choice. The design is older, and in our eyes also more elegant. Because of this older design, the economic outlay needed to acquire and update an HR53 can be considerably less than what was required for e.g. an HR48. For a smaller initial investment you get 10 extra feet (and double the weight)!! Of course an older boat needs extra care, (lots of extra) money and attention to bring her up to date. But on balance, it seemed like a no-brainer. I had looked also at the Hallberg-Rassy 49, a truly ocean-going four-wheel drive kind of yacht - as an alternative. But the number of HR49s available was absolutely zilch when we were looking for a next boat. With a D/L of 268 (by my calculations - others only come to 264!), the HR53 is a border-line case of being either a moderately heavy, or a heavily moderate displacement vessel... So a Hallberg-Rassy 53 it was going to be.


During the summer of 2015 we started looking around in earnest for a suitable Hallberg-Rassy 53. For good measure we also checked out a few HR48s, and kept our eyes open for any HR49 hanging around. Much as we find each and every Hallberg-Rassy an incredibly beautiful boat, we decided, after seeing a couple of Hallberg-Rassies 53, that the HR53 definitely was "our" kind of boat. In July 2015, we had a really beautiful HR53 in our sights, Seaquest, put up for sale by Nova Yachting of Bruinisse in The Netherlands. We spent several weekends looking her over and discussing whether we should or shouldn't go for her. Alas, when we finally made up our minds, we were told by Nova, the Dutch Hallberg-Rassy dealer, that she had been sold to a lucky couple of Dutch people just 20 hours before we had communicated our decision to buy Seaquest. We were absolutely shattered and utterly devastated (see mouse)! We were a bit non-plussed though to see Seaquest (in the meantime she had been given another name) was put up for sale again towards the end of 2018! In July 2019 we by chance saw the owner of Seaquest who was admiring our boat in Bruinisse... a small world; he was thinking of buying another boat for long distance sailing!


But back in 2015, we bravely accepted this setback, put up Ngahue III for sale so that we would have money readily available when we found our ideal HR53, and started travelling around Europe to view all available HR53s (plus a couple of HR48s)! After 3 months, we finally managed to find another suitable HR53... She turned out to be a 1995 HR53 with hull number 19, lying in one of the heated factory halls of the Knierim Yachtbuilding company in Kiel (where they custom-build super German quality racing yachts - our 53 looked pathetically small in their boat shed, stored next to a couple of 85 and 95-foot Knierim yachts!!). Having spent most of her sailing life in the Baltic, "Tabaluga" (for this was her name) was solid and well-kept, even if pretty "bare" from a blue-water sailing point of view. Unfortunately, the previous owners had merrily sanded down her decks to get beautiful brown wood - this had reduced the walking deck to less than 10mm instead of the normal 12mm. Such a pity of the lost wood!!! At some time they had also painted a lot of the wood on and around the decks in some kind of brown varnish, which was now peeling off in all sorts of "un-useful" places, such as under grab handles - the remaining slivers of varnish really cut into our hands!! However, with the necessary investments, we felt she fit the bill and could be easily converted into a proper ocean-sailing boat.


The essentials of the future Ngahue IV (hull, deck & propulsion) were sound, as confirmed by an extensive survey understaken in two steps by Mr Uwe Baykowski of Kiel. Our immediate attention was directed towards the boat's rigging (much of it the original standing rigging from 1995 - an absolute no-no for our insurers to allow us to go from Kiel to Belgium without replacing the whole lot) and her electronics (some of that also original from 1995). See the Technical page on Ngahue IV to see how we have "Furuno-ised" whole swathes of the boat's electronics and how the Reckmann company renewed our standing rigging! Pictured here is the layout of our HR53 - it also shows off the "traditional" (that is to say traditional for 1990s designs) lines of her hull shape!

In November 2017, we joined the 2017-ARC (Atlantic Rally for Cruisers) and from the Caribbean hoped to continue with a circumnavigation that should take us, from 2018 onwards, across the Pacific, to New Zealand, and back to the Atlantic, via the Indian Ocean (2019), etc. etc. To see how this turned out, we refer you to the "We're off" pages on this site! For details on our ARC preparations, please refer to the special "Preparing for the ARC" page... I've also included a page with lessons learned... And you'll see how we didn't manage to complete our circumnavigation on our first attempt...


When we took possession of Ngahue IV at the end of April 2016, she seemed a huge boat for just the two of us. We were completely awe-struck by the size and weight of our new boat. Worryingly though, after a month or two she seemed perfectly manageable; and dare I say that by the time we put her up into winter storage in September 2016 (there was a lot of work to be done), she seemed decidedly on the petite and small side (admittedly our neighbour in Nieuwpoort, Fovea, has a modern Beneteau Oceanis 55 design and his boat, although inches longer than ours, appears huge when moored next to us). Taking the mast down in September 2016 was, however, a salutary experience, and a useful reminder of the size and weight of fittings on a boat this size!

When sailing down to Lanzarote in very big seas, we again realised how small any sailing boat is in a big ocean! Look at the film we posted on You-Tube, as well as our further ocean-sailing films!