Our boat's name 'Ngahue' is a pointer to my far-back New Zealand/Kiwi origins. Ngahue was a Maori navigator... it's as simple as that! There are several versions of the story of Ngahue, an intrepid navigator in Maori mythology. Because Maori stories were passed down verbally, from generation to generation, from iwi to iwi (or tribe to tribe as I was still taught in the early 1960s), differences in the accounts of Ngahue's adventures have crept in. Depending on the iwi (or tribe) and area of New Zealand that you look to, variations are quite common, but the main thrust remains the same - he is one of the discoverers of Ao Tea Roa, land of the long white cloud, alongside Kupe. In some instances, the name Ngahue is also recorded as Ngake.


In our preferred version (and my sincere apologies, especially to the Maori, if some of my European romanticism has crept in here), Ngahue was the travel-companion of Kupe. Both were intrepid Polynesian navigators, who set off from Hawaiki the original homeland of New Zealand's Maori settlers and discovered Ao Tea Roa (or Aotea-roa). Hawaiki today is held to be the island of Raiatea, in French Polynesia, which interestingly enough is also the island that the Tahitian (high) priest & navigator Tupaia hailed from. Tupaia accompanied Captain James Cook for part of his first Pacific travels - notably the leg from Tahiti to New Zealand (where he proved to be an invaluable go-between with the Maori). Sadly, Tupaia later died of disease in what to day is Indonesia's Djakarta. Tupaia's life makes fascinating reading, but his story goes beyond the scope of this short paragraph on Ngahue.


Certainly until the 1960s, it was generally thought the great migration (also known as the Great Fleet Migration) took place around 1250 to 1300 A.D. (dates vary and also 1320-1350 is mentioned by some). Kupe sailed in his canoe the Matahorua, and Ngahue in his canoe the Tawirirangi. They led these expeditions of the "Vikings of the Sunrise" (as Sir Peter H. Buck - or Te Rangi Hiroa, to give him his Maori name - refers to the early Maori navigators and seafarers to New Zealand). Having once upon a time trained as a historian at the University of London, it is good to see how, as more and extensive research is done into where the various Polynesian peoples came from (modern DNA research points to Polynesian roots in SE Asia or Taiwan), the history of Ngahue takes on other dimensions. Ethnologist David Simmons for instance, or historian Andrew Sharp completely demolished the Great Fleet theory, arguing that much of the 19th century evidence collected by the Victorians was fabricated or re-arranged (romanticised?) to fit a given theory (most of this was what I learned at school in the 1950s and early 1960s). For instance, improved carbon dating subsequently and apparently put first Maori settlers in New Zealand in the 9th century, and moved Kupe to around 750 A.D. So, the relatively simple story of Ngahue that I read more than 30 years ago (and when I decided to name my first HR29 after him) and learned in school in Auckland in the 1960s has since become more complicated, or even, dare I say convoluted. In summary, I'll stick to my own simplified belief that Ngahue is an intrepid Maori navigator who has continuously inspired me in my own more restricted attempts at (long distance) navigation.


As an adjective, ngahue also means 'to arrive with spray', if I remember correctly from the Maori dictionary, that I consulted many years ago at the NZ embassy in Brussels in the 1980s to look for a name for my future yacht that would allow me to sail back to New Zealand. For those early days of Ngahue, my Hallberg-Rassy 29, this was a most apt description of the conditions in which man and boat sailed (and never got any further than Falmouth en route to Whangarei, my town of birth). Pictured here is the baptism of the Maori chieftain Te Ngahue in a print that I spotted on the Internet. As the baptism took place at the time of this great warrior's death, the scene looks a very placid and touching affair, despite the fact that Te Ngahue was a much feared and ferocious leader who reputedly ate the flesh of his defeated opponents in his younger days! This should not come as a great surprise, because cannibalism was quite de rigueur with victorious Polynesian fighters: it enabled you to take over the powers, the mana, of the beaten opponent, making the victor an even greater warrior himself.


Another story from Maori mythology tells of Ngahue's fearsome wife who was jealous of her husband's travels around the Pacific. She sent an equally fearsome Taniwha (supernatural water monster) fish called Poutini after her roving husband to keep an eye on the absentee spouse. Again stories vary on what happened from here on. But in one, the fearsome fish Poutini swam up a river, fell down (well, even great Taniwhas can trip themselves up) and turned into green stone, the very hard stone used by the Maori in jewellery and tools. We liked this story so much that we decided that our Ngahue IV should have its own Poutini in the form of the boat's tender! The first tender was made by the German company Pischel Bolero - a reference there to Maurice Ravel's piece of music perhaps? The second Poutini (number one was sold in French Polynesia) originates from Columbia. We passed through the area when we were in Columbia, and see our purchase as our (very small) contribution towards developing an economy based on manufacturing goods rather than drugs...

Model of a Maori Waka/war canoe - an idea of the kind of craft that Kupe or Ngahue would probably NOT have sailed in. For the great ocean crossings, it is accepted that very large, twin-hulled canoes were used, which could transport many people, cargo, and animals over long distances across the Pacific. Sitting behind my computer screen in Belgium, it was one of the few pictures I found and therefore include it as a beauty of Maori boat building for readers to admire. Like sitting at the chart table of Ngahue IV and thinking in admiration about those incredible voyages that the Polynesians and the Maori navigators and their crews made all those centuries ago.


Above, Ngahue IV can be seen on her first trip under our ownership having exited the Kiel Canal and berthed in Cuxshaven's marina. This was after leaving the Knierim boatyard in Kiel where she had spent the winter 2015/16. We motored all the way down to Brunsbüttel at the end of the Kiel Canal, transited the locks, and crossed the Elbe estuary to spend some time in Cuxhaven. Our trip subsequently took us to the North Sea coastal island of Nordeney, (where we successfully, though ever so gently, ran aground at Low Water Springs - we were in good company as even the local ferry ran aground not too far away!) and from there in one go down to Nieuwpoort - Belgium (see photo below). Attentive readers will note how bit by bit, as you advance chronologically through the pages of this site, more and more "stuff" was added to the boat with time!


We consider Nieuwpoort's Novus Portus Euromarina as our "home" marina as we have kept our several Ngahues since April 1993. It was from this home port/marina that we left in July 2017 to commence our circumnavigation. For more information on the VY Nieuwpoort Euromarina (formerly the VVW-Nieuwpoort) follow the link below. In all, there are three marinas in Nieuwpoort, all directly connected to the sea: the VY Nieuwpoort, the KYCN, and the WSKLuM). All have visitors' facilities, which in normal (pre-Brexit) years tend to become pretty crowded in the summer holiday period as sailors from neighouring (northern) countries sail south and return north afterwards. 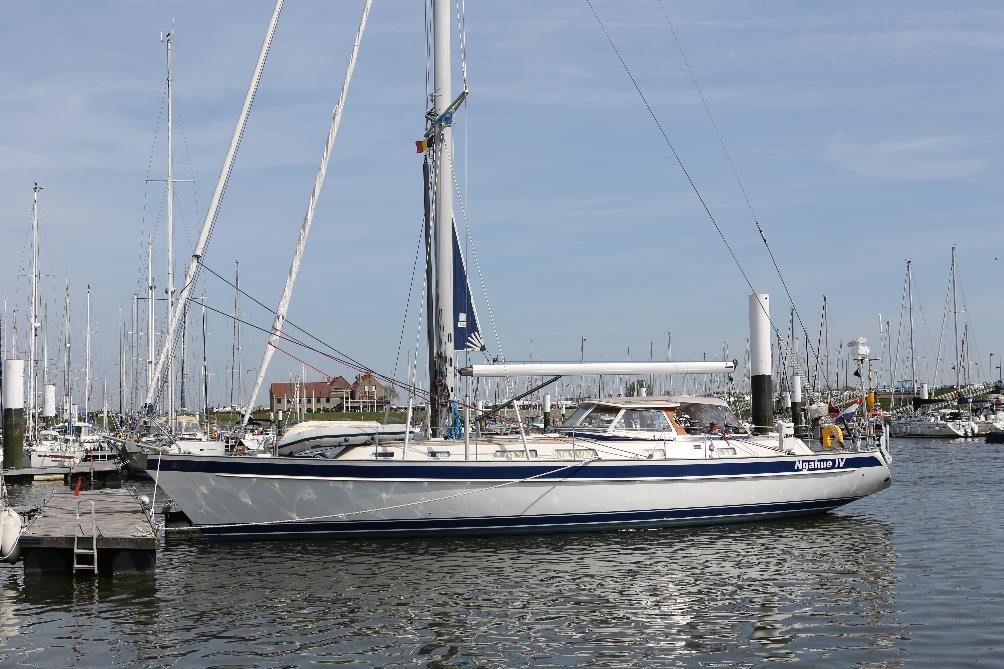